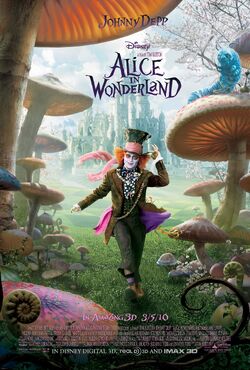 Alice in Wonderland is a 2010 British-American live-action/animated dark fantasy adventure film directed by Tim Burton from a screenplay written by Linda Woolverton. The film stars Johnny Depp, Anne Hathaway, Helena Bonham Carter, Crispin Glover, Matt Lucas, and Mia Wasikowska, and features the voices of Alan Rickman, Stephen Fry, Michael Sheen, Timothy Spall, Barbra Windsor, and Christopher Lee. Loosely inspired by Lewis Carroll's fantasy novels, Alice's Adventures in Wonderland and Through the Looking-Glass, and Walt Disney's 1951 animated film of the same name, the film tells the story of a nineteen-year-old Alice Kingsleigh, who is told that she can restore the White Queen to her throne, with the help of the Mad Hatter. She is the only one who can slay the Jabberwocky, a dragon-like creature that is controlled by the Red Queen and terrorizes Underland's inhabitants. In this situation, Alice fights against the Red Queen to protect the world.

In London, 1871, troubled by a strange recurring dream and mourning the loss of her father, 19-year-old Alice Kingsleigh attends a garden party at Lord Ascot's estate. There, she is confronted with an unwanted marriage proposal by Lord Ascot's son, Hamish, and the stifling expectations of the society in which she lives. Unsure of how to proceed, she pursues and follows a rabbit wearing a blue waistcoat and carrying a pocketwatch and falls into a deep rabbit hole under a tree. She enters a small door by drinking from a bottle labeled 'Drink Me' (called Pishsalver) and emerges to a forest in a magical place called Wonderland where she is greeted by a White Rabbit, a Dormouse, a Dodo, Talking Flowers, and identical twins named Tweedledee and Tweedledum who all apparently know her. Alice suggests that it is all a dream while the others argue over whether Alice is "the right Alice" who must slay the Red Queen's Jabberwocky on Frabjous Day and restore the White Queen (who is the Red Queen's sister) to power, as foretold by Absolem the Blue Caterpillar and his Oraculum (a scroll-like calendar which tells Wonderland's history and future). The group is then ambushed by a ravenous beast called a Bandersnatch and an army of playing-cards called Red Knights led by the Knave of Hearts (the Red Queen's tall general and lover). Alice and the Tweedles escape into the woods. The Knave steals the Caterpillar's Oraculum. The Dormouse leaves the others behind with one of the Bandersnatch's eyes in her possession. The Tweedles are then captured by the Red Queen's large Jubjub bird.

The Knave informs the Red Queen that Alice threatens her reign, which makes her order him, the Red Knights, and a Bloodhound (who has a wife and children imprisoned) to find Alice immediately. Meanwhile, Alice enters the Tulgey Woods where she is greeted by a grinning vanishing Cheshire Cat who guides her to the Mad Hatter, the March Hare and the Dormouse's tea party. The Hatter explains to Alice that he joined the resistance because the Red Queen destroyed his entire village and killed his family when she first ruled Wonderland. He later helps Alice to avoid capture by allowing himself to be seized instead. Later, Alice is found by the Bloodhound, but Alice insists upon helping the Hatter.

At Salazar Grum castle, the Red Queen notices Alice when she ate Upelkuchen (a cake labeled 'Eat Me' which makes the consumer grow) during a game of Croquet with flamingos and hedgehogs. The rabbit gave Alice some of the cake that allows her to grow too much and out of her dress. The Queen is unaware of her true identity because Alice pretended to be called "Um" and therefore welcomes her as a guest. Alice learns that the vorpal sword, the only weapon capable of killing the Jabberwocky, is locked inside the den of the Bandersnatch. Alice obtains the sword and befriends the Bandersnatch by returning its eye. The Knave attempts to seduce Alice, but she rebuffs him, causing the jealous Red Queen demanding for Alice to be beheaded. During a battle between the Knave and the Hatter, Mallie accidentally reveals Alice. She then escapes on the back of the grateful Bandersnatch and delivers the sword to the White Queen. The White Queen gives Alice a potion that returns her normal size and gives her a new dress and later that night she meets again with Absolum who tells her she is very much Alice and keep the sword at hand when she battles the Jabberwocky. The Cheshire Cat saves the Mad Hatter from the executioner by disguising himself as him in exchange for borrowing his beloved hat. The Hatter calls for rebellion against the Red Queen, which all her subjects agree to by starting to shout out "Down with Bloody Big Head." The rebellion is quickly put down when the Jubjub bird begins to kill the disloyal subjects, but the resistance manages to free the Bloodhound's family and flees to the White Queen's castle; both armies prepare for battle on Frabjous Day. The next day, the scroll states that Alice has to battle the Jabberwocky, being under pressure she goes somewhere to cry and sees Absolum cocooning himself. The Caterpillar finally gets Alice to remember that she has been to Wonderland when she was a little girl, and advises her to fight the Jabberwocky just before completing his transformation into a pupa.

On Frabjous Day, the Queens gather their armies on a chessboard-like battlefield and send Alice and the Jabberwocky to decide the battle in single combat. Encouraged by the advice of her late father, Alice fights the Jabberwocky among a demolished spiraling tower surrounding the battlefield. During this fight, a catapult stone kills the Jubjub bird; Alice finally defeats the Jabberwocky by jumping from the top of the tower onto its neck and beheads it. Frabjous Day has finally ended and the Red Knights turn against their ruler. As punishment for their crimes, the White Queen banishes her sister and the Knave into exile together. The Knave attempts to kill the Red Queen because he grew sick of her affections, yet the Mad Hatter protects the Red Queen from his attack. After the Hatter performs a celebration dance called Futterwacken, the White Queen gives Alice a vial of the Jabberwocky's purple blood whose power will bring her whatever she wishes. She decides to rejoin the everyday world after saying farewell to her friends. Back in England, Alice refuses Hamish's proposal and impresses Lord Ascot with her idea of establishing oceanic trade routes to Hong Kong, inspiring him to take her as his apprentice. As Alice prepares to set off on a trading ship, a light-blue butterfly with dark vein markings lands on her shoulder, and Alice recognizes him as the former Caterpillar.

Tim Burton signed with Walt Disney Pictures to direct two films in Disney Digital 3D, which included Alice in Wonderland and his remake of Frankenweenie. Burton developed the story because he never felt an emotional tie to the original book.

He explained "the goal is to try to make it an engaging movie where you get some of the psychology and kind of bring a freshness but also keep the classic nature of Alice." On prior versions, Burton said "It was always a girl wandering around from one crazy character to another, and I never really felt any real emotional connection." His goal with the new film is to give the story "some framework of emotional grounding" and "to try and make Alice feel more like a story as opposed to a series of events." Burton focused on the poem "Jabberwocky" as part of his structure, and refers to the described creature by the name of the poem rather than by the name "Jabberwock" used in the poem. Burton also stated that he does not see his version as either a sequel to any existing Alice film nor as a "re-imagining". However, the idea of the climax of the story being Alice's battle with the Queen's champion, the Jabberwocky, was first added in the video game American McGee's Alice, and the landscape, tower, weapons and appearance of Alice in those scenes of the film are very reminiscent of the same scenes in the game. This film was originally set to be released in 2009 but was pushed back to March 5, 2010. Principal photography was scheduled for May 2008, but did not begin until September and concluded in three months. Scenes set in the Victorian era were shot at Torpoint and Plymouth from September 1 to October 14. Two hundred and fifty local extras were chosen in early August. Locations included Antony House in Torpoint, Charlestown, Cornwall and the Barbican, however, no footage from the Barbican was used. Motion capture filming began in early October at Sony Pictures Studios in Culver City, California, though the footage was later discarded. Filming also took place at Culver Studios. Burton said that he used a combination of live action and animation, without motion capture. He also noted that this was the first time he had filmed on a green screen. Filming of the green screen portions, comprising 90% of the film, was completed after only 40 days. Many of the cast and crew felt nauseated as a result of the long hours surrounded by green, and Burton had lavender lenses fitted into his glasses to counteract the effect. Due to the constant need for digital effects to distort the actors' physical appearances, such as the size of the Red Queen's head or Alice's height, visual effects supervisor Ken Ralston cited the film as being exhausting, saying it was "The biggest show I've ever done, [and] the most creatively involved I've ever been." Sony Pictures Imageworks designed the visual effects sequences. Burton felt 3D was appropriate to the story's environment. Burton and Zanuck chose to film with conventional cameras, and convert the footage into 3D during post-production; Zanuck explained 3D cameras were too expensive and "clumsy" to use, and they felt that there was no difference between converted footage and those shot in the format. James Cameron, who released his 3D film Avatar in December 2009, criticized the choice, stating, "It doesn't make any sense to shoot in 2-D and convert to 3-D". After filming, a set of books (from giant to tiny, to echo Alice’s sizes throughout the film) was given out to crew members and media promoting the project. Full of details about the characters, settings and plot, the books emphasise the importance of 3D as an immersive experience.

Not only did the film do well financially and critically, it also went on to win the Oscar for Best Production Design and Best Costume Design. It was nominated for Best Visual Effects but lost to Inception.