This article is about the character. For the film, see BATMAN.

The Batman (Real Name: Bruce Wayne) is a vigilante who fights crime in Gotham City. He is the central protagonist of Tim Burton's BATMAN and it's sequel, BATMAN RETURNS.

Bruce Wayne was the son of Dr. Thomas and Martha Wayne. They were murdered in front of him by a criminal named Jack Napier, while he was still very young.

He was raised by his family's trusted butler, Alfred Pennyworth, from then on.

After the death of his parents, Wayne devoted most of his time and energy to becoming a very well equipped vigilante with the intent of waging a war on crime. His years of training are only hinted at, with a armory display in Wayne Manor. He took on the name Batman, and dons a Bat-themed suit to strike fear in the hearts of criminals.

Dance with the devil[]

He later met and began a relationship with photographer Vicki Vale, who would later discover his secret. He would also encounter and battle his parents' killer, now known as Joker, and stopped him from killing Gotham's citizens with tempered cosmetics.

Batman made his first appearance in Detective Comics #27 (1939), where he was originally referred to as "The Bat-Man". 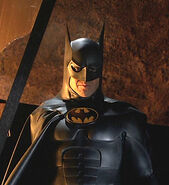 Batman about to fight the muggers.

Batman catching the last mugger with his grappling hook.

Batman glaring at the mugger.

"I want you to tell your friends all about me."

Batman jumping off a building.

Bruce Wayne at his charity ball.

Bruce being mesmerized by Vicki.

Bruce taking an interest in Vicki.

Bruce seeing Vicki and Knox taking an interest in his armor collection.

Bruce following Vicki and her colleague, Alexander Knox into a room full of armors.

Bruce introducing himself to Knox and Vicki.

Bruce and Vicki striking up a friendly conversation.

Bruce, Vicki and Knox being approached by Alfred Pennyworth.

Bruce informed by Alfred that Commissioner Gordon has suddenly left the party in a hurry.

Bruce excusing himself from Knox and Vicki.

In the Batcave, Bruce searches through some footage taken during his party.

Batman revealing his presence to Commissioner Gordon and the police.

Batman punching a goon from behind his back.

Batman giving Napier a taunting smirk before he disappears.