This article is about the film. For the character, see Betelgeuse, for the animated series, see Beetlejuice (TV series). 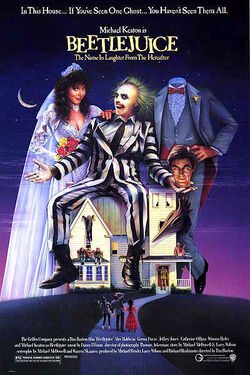 Beetlejuice is the third feature film directed by Tim Burton.

Barbra and Adam Maitland are a married couple who live in a New England home. Their real estate agent, Janine tries to get them to sell the house to a married couple with a family. They refuse and head off to buy some stuff from their hardware store. On the way back, they come across a dog along the road and swerve to the side of the bridge. Unlucky for them, the dog goes off the wood and the couple fall into the river below. Later, Adam and Barbra are home soaking wet, both not knowing that they're dead until they realize that they can't burn, they have no reflection in the mirror, whenever they go out, they're on a sandy planet known as Saturn and almost get eaten by Sandworms and they have a book called "The Handbook for the Recently Deceased."

Also unlucky for them, Janine sells the house to a man named Charles Deetz, his second wife (She is Lydia's real mom in the cartoons--but stepmom in the film), Delia Deetz and his only daughter Lydia. No one can see the ghosts, but Lydia can because she's goth and she believes in the dead. After failing parlor tricks, the Maitlands decide to go to the Netherworld to get some help, unknowingly leaving the book behind. Before their appointment, they saw a flyer for a guy named "Betelgeuse" (spelled in the title as Beetlejuice) and see an ad for him on TV and think that he has the answer to their problems. However, Juno, their caseworker, warns them not to hire him for he is bad and will cause a lot of trouble. As they leave, we don't see the title character himself as of yet, but he is seen luring a fly and then, presumably eating him offscreen.

After another failed attempt to scare the Deetzes off, Adam and Barbra befriend Lydia. The next day, Lydia tries talking to Delia about the ghosts, but she doesn't listen for she is having a dinner party for her Curator/Art Dealer and his friends. Adam and Barbra, despite Juno's warnings summon Betelgeuse, who turns out to be nothing but a slovenly, perverted, shallow, and scary looking ghoul. They go back home determined that they can scare the Deetzes off themselves. They try scaring them at their dinner party, but it turns out, they loved the congo to "Day-O" and invite them downstairs. Lydia tells everyone that they can't and the guests leave in a huff of disbelief. The Deetzes and their curator Otho enter the attic where they couldn't find the ghosts, but Otho steals the handbook. Betelgeuse, stirring things up, turns into a snake, tries to kill Charles and is taking an interest in Lydia. Barbara calls Betelgeuse three times sending him away, but it hurts Lydia for they had summoned him to scare them away.

Betelgeuse and Barbra argue about the job, but it turns out that he reveals his plan to marry Lydia so he can join the land of the living much to Adam and Barbra's horror. The ghosts come back to the afterlife where Juno is mad at them for 1) hiring Betelgeuse and forgetting to put him back, 2) for letting the humans discover them/take pictures of them, and 3) for letting Otho getting hand of the book. She convinces them to try and scare them again. This time by making scary faces and scaring them away, though Adam and Barbra who now see Lydia as a daughter, don't want to. In the meantime, Lydia writes her suicide note so she can join Adam and Barbra in the dead and meets up with Betelgeuse.

Adam and Barbra head off to stop Lydia from saying his name, but end up scaring her. Luckily, as they went back to their normal selves, they tell her it's just them and they decided to let the Deetzes stay. Downstairs, Otho has had his people move the model that Adam built downstairs and he uses the wedding clothes to perform a ritual to make the ghots come alive. However, they are dying for they are being exorcised by mistake. Lydia, having no choice, summons Betelgeuse on the condition that Lydia must marry him. Betelgeuse sucessfully saves the Maitlands, gets rid of Otho and the curators, but conducts the wedding between him and a disgusted Lydia. Before Betelgeuse can marry Lydia, Barbra and Adam try to unsummon him but to no avail with Adam being shrunk and stuck in the model and Barbara first having her mouth gotten shut, and then being taken to the sandy planet of Saturn, where she suddenly comes face to face with the sandworm from earlier in the film. Adam's car hits Betelgeuse's foot, inturrupting the marraige ceremony and Betelgeuse gets eaten and banished by the Sandworm. Later on, Betelgeuse, ends up in the waiting room where he ticks off a Witch Doctor who shrinks his head and the Deetzes and the Maitlands live together in harmony.

The financial success of Pee-wee's Big Adventure (1985) made Burton a "bankable" director, and he began working on a script for Batman with Sam Hamm. While Warner Bros. was willing to pay for the script's development, they were less willing to green-light Batman. Meanwhile, Burton had begun reading the scripts that had been sent his way, and was disheartened by their lack of imagination and originality, one of them being Hot to Trot. David Geffen handed Burton the script for Beetlejuice, written by McDowell (who wrote the script for "The Jar", an episode of Alfred Hitchcock Presents directed by Burton).

Wilson was brought on board to continue rewriting work with McDowell, though Burton replaced McDowell and Wilson with Skaaren due to creative differences. Burton's original choice for Betelgeuse was Sammy Davis Jr., but Geffen suggested Keaton. Burton was unfamiliar with Keaton's work, but was quickly convinced. Burton cast Ryder upon seeing her in Lucas. O'Hara quickly signed on, while Burton claimed it took a lot of time to convince other cast members to sign, as "they didn't know what to think of the weird script."

Beetlejuice's budget was US$15 million, with just US$1 million given over to visual effects work. Considering the scale and scope of the effects, which included stop motion, replacement animation, prosthetic makeup, puppetry and blue screen, it was always Burton's intention to make the style similar to the B movies he grew up with as a child. "I wanted to make them look cheap and purposely fake-looking", Burton remarked. Burton had wanted to hire Anton Furst as production designer after being impressed with his work on The Company of Wolves (1984) and Full Metal Jacket (1987), though Furst was committed on High Spirits, a choice he later regretted. He hired Bo Welch, his future collaborator on Edward Scissorhands (1990) and Batman Returns (1992). The test screenings were met with positive feedback and prompted Burton to film an epilogue featuring Betelgeuse foolishly angering a witch doctor. Warner Bros. disliked the title Beetlejuice and wanted to call the film House Ghosts. As a joke, Burton suggested the name Scared Sheetless and was horrified when the studio actually considered using it. Exterior shots were filmed in East Corinth, Vermont.

While the setting is the fictional village of Winter River, Connecticut, all outdoor scenes were filmed in East Corinth, a village in the town of Corinth, Vermont. Interiors were filmed at The Culver Studios in Culver City, California. Principal photography began on March 11, 1987.

Retrieved from "https://timburton.fandom.com/wiki/Beetlejuice?oldid=10852"
Community content is available under CC-BY-SA unless otherwise noted.