Charlie and the Chocolate Factory

Edit
Charlie and the Chocolate Factory 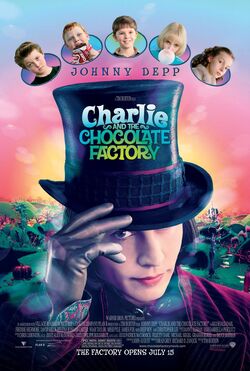 Charlie and the Chocolate Factory is a 2005 British-American musical fantasy film directed by Tim Burton and written by John August, based on the 1964 British novel of the same name by Roald Dahl. The film stars Johnny Depp as Willy Wonka and Freddie Highmore as Charlie Bucket, alongside David Kelly, Helena Bonham Carter, Noah Taylor, Missi Pyle, James Fox, Deep Roy, and Christopher Lee. The storyline follows Charlie as he wins a contest along with four other children and is led by Wonka on a tour of his chocolate factory.

Development for a second adaptation of Charlie and the Chocolate Factory (filmed previously as Willy Wonka & the Chocolate Factory in 1971) began in 1991, which resulted in Warner Bros. providing the Dahl estate with total artistic control. Prior to Burton's involvement, directors such as Gary Ross, Rob Minkoff, Martin Scorsese, and Tom Shadyac had been involved, while actors Bill Murray, Nicolas Cage, Jim Carrey, Michael Keaton, Brad Pitt, Will Smith, Adam Sandler, and many others, were either in discussion with or considered by the studio to play Wonka.

Burton immediately brought regular collaborators Depp and Danny Elfman aboard. Charlie and the Chocolate Factory represents the first time since The Nightmare Before Christmas (which was produced by Burton) that Elfman contributed to a film score using written songs and his vocals. Filming took place from June to December 2004 at Pinewood Studios in the United Kingdom. Charlie and the Chocolate Factory was released to positive critical reviews and was a box office success, grossing $475 million worldwide.

Charlie Bucket and his family live in poverty near the Wonka Factory. The company's owner, Willy Wonka, has long since closed his factory due to problems concerning industrial espionage committed by his jealous rivals, which led him to fire all of his employees, including Charlie's Grandpa Joe.

One day, Wonka restarts his factory and announces a contest in which Golden Tickets have been placed in five random Wonka Bars worldwide, and the winners will receive a full tour of the factory as well as a lifetime supply of chocolate, while one will receive an additional prize at the end of the tour. Wonka's sales subsequently skyrocket, and the first four tickets are found by the gluttonous Augustus Gloop, the spoiled Veruca Salt, the arrogant Violet Beauregarde, and the ill-tempered Mike Teavee. Charlie tries twice to find a ticket, but both bars come up empty. After overhearing that the final ticket was found in Russia, Charlie finds a ten-dollar note and purchases a third Wonka Bar. A lady in the shop finds out in the paper that the Russian ticket is revealed to be a forgery just as Charlie discovers the real ticket inside the wrapper. He receives monetary offers from two people in the store for the ticket, but the cashier tells him to not trade it at any cost, and Charlie runs back home. At home, Charlie says that he wants to trade it for money for his family's betterment. After a pep talk from Grandpa George explaining that while there is money out there the ticket is worth more, so Charlie decides to keep it and bring Grandpa Joe to accompany him on the tour.

Charlie and the other ticket holders are greeted outside the factory by Wonka, who then leads them into the facility. Individual character flaws cause the other four children to give into temptation, resulting in their elimination from the tour while Wonka's new employees, the Oompa-Loompas, sing a song of morality after each. All the while, Wonka reminisces on his troubled past and how his dentist father, Wilbur, strictly forbade him from consuming candy due to the potential dental risks. After sneaking a piece of candy, Wonka instantly became hooked and ran away from home to follow his dreams. When he returned however, both his father and their house were gone. After the tour, the four eliminated children leave the factory with an exaggerated characteristic or deformity related to their elimination while Charlie learns that Wonka, now approaching retirement, intended to find a worthy heir. Since Charlie was the "least rotten" of the five, Wonka invites Charlie to come live and work in the factory with him, on the condition that he leave his family behind. Charlie declines, as his family is the most important thing in his life.

Afterwards, everything gets better for Bucket family, as they repair the house, and Charlie’s father gets a job as a repair man at the Toothpaste factory and gets better pay. As Charlie and his family live contently, Wonka becomes despondent, causing his company and sales to decline. He eventually turns to Charlie for advice, and he decides to help Wonka reconcile with his estranged father. During the reunion, Wonka realizes the value of family while Wilbur accepts his son for who he is and not what he does. Afterwards, Wonka allows Charlie and his family to move into the factory together.

Principal photography for Charlie and the Chocolate Factory started on June 21, 2004 at Pinewood Studios in England. Director Tim Burton and composer Danny Elfmanfound filming somewhat difficult because they were simultaneously working on Corpse Bride. The Wonka Factory exterior was coincidentally constructed on the same backlotBurton had used for Gotham City in Batman (1989). The ceremonial scene required 500 local extras. The Chocolate Room/River setpiece filled Pinewood's 007 Stage. As a consequence of British Equity rules, which state that children can only work four and a half hours a day, filming for Charlie and the Chocolate Factory languished for six months and ended in December 2004.

The architecture of the Bucket family home was influenced by Burton's visit to Roald Dahl's writing hut. Like the book, the film has a "timeless" setting and is not set in a specific country. "We've tried not to pinpoint it to any place," production designer Alex McDowell explained. "The cars, in fact, drive down the middle of the road." The town, whose design was shaped by the black and white urban photography of Bill Brandt, Pittsburgh and Northern England, is arranged like a medieval village, with Wonka's estate on top and the Bucket shack below. The filmmakers also used fascist architecture for Wonka's factory exterior, and designed most of the sets on 360° sound stages, similar to cycloramas. Burton biographer Mark Salisbury wrote that Charlie and the Chocolate Factory "melds 1950s and '70s visuals with a futuristic sensibility that seems straight out of a 1960s sense of the future." The "TV Room" was patterned after photographs from 2001: A Space Odyssey, Danger: Diabolik and THX 1138. Danger Diabolik also served as inspiration for the Nut Room and Inventing Room.

Tim Burton avoided using too many digital effects because he wanted the younger actors to feel as if they were working in a realistic environment. As a result, forced perspective techniques, oversized props and scale models were used to avoid computer-generated imagery (CGI). Deep Roy was cast to play the Oompa-Loompas based on his previous collaborations with Burton on Planet of the Apes and Big Fish. The actor was able to play various Oompa-Loompas using split screen photography, digital and front projection effects. "Tim told me that the Oompa-Loompas were strictly programmed, like robots — all they do is work, work, work," Roy commented. "So when it comes time to dance, they're like a regiment; they do the same steps."

A practical method was considered for the scene in which Violet Beauregarde turns blue and swells up into a giant 10-foot blueberry. A suit with an air hose was considered at one point for the beginnings of the swelling scene, before the decision was made to do the entire transformation in CGI. The visual effects house Cinesite was recruited for this assignment. In some shots that were shot of AnnaSophia Robb's head, a facial prosthetic was worn to give the impression that her cheeks had swelled up as well. Because this decision was made late in the film's production, any traces of Violet's blueberry scene were omitted from trailers or promotional material.

Rather than rely on CGI, Burton wanted the 40 squirrels in the Nut Room to be real. The animals were trained every day for 10 weeks before filming commenced. They began their coaching while newborns, fed by bottles to form relationships with human trainers. The squirrels were each taught how to sit upon a little blue bar stool, tap and then open a walnut, and deposit its meat onto a conveyor belt. "Ultimately, the scene was supplemented by CGI and animatronics," Burton said, "but for the close-ups and the main action, they're the real thing." Wonka's Viking boat for the Chocolate River sequence floats down a realistic river filled with 192,000 gallons of faux melted candy. "Having seen the first film, we wanted to make the chocolate river look edible," McDowell says. "In the first film, it's so distasteful." The production first considered a CGI river, but Burton was impressed with the artificial substance when he saw how it clung to the boat's oars. Nine shades of chocolate were tested before Burton settled on the proper hue.

The original music score was written by Danny Elfman, a frequent collaborator with director Tim Burton. Elfman's score is based around three primary themes: a gentle family theme for the Buckets, generally set in upper woodwinds; a mystical, string-driven waltz for Willy Wonka; and a hyper-upbeat factory theme for full orchestra, Elfman's homemadesynthesizer samples and the diminutive chanting voices of the Oompa-Loompas.

Elfman also wrote and performed the vocals for four songs, with pitch changes and modulations to represent different singers. The lyrics to the Oompa-Loompa songs are adapted from the original book, and are thus credited to Roald Dahl. Following Burton's suggestion, each song in the score is designed to reflect a different archetype. "Wonka's Welcome Song" is a maddeningly cheerful theme park ditty, "Augustus Gloop" a Bollywood spectacle (per Deep Roy's suggestion), "Violet Beauregarde" is 80's hip hop, "Veruca Salt" is 1930's Christmas Music, and "Mike Teavee" is punk.

The original motion picture soundtrack was released on July 12, 2005 on Warner Bros. Records.

Charlie and the Chocolate Factory earned $56,178,450 in its opening weekend, the fifth-highest opening weekend gross for 2005 and stayed at #1 for 2 weeks. Charlie and the Chocolate Factory eventually grossed $206,459,076 in US totals and $268,509,687 in foreign countries, coming to a worldwide total of $474.97 million. It was the fifty-eighth highest grossing film of all time when released, as well as seventh-highest for the US and eighth-highest worldwide for the year of 2005.