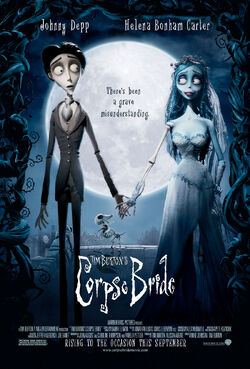 Victor Van Dort, the son of nouveau riche fish merchants, and Victoria Everglot, the neglected daughter of impoverished aristocrats, prepare for their arranged marriage, which will simultaneously raise the social class of Victor's parents and restore the wealth of Victoria's family (According to Plan). Although they fall in love instantly, the nervous Victor ruins their wedding rehearsal by forgetting his vows and clumsily setting Lady Everglot's dress on fire. Pastor Goswell then declares that until Victor is ready, there will be no wedding. Fleeing to the nearby forest, he practices his vows with a tree and places his wedding ring on a root. However, the root is revealed to be the finger of a dead woman named Emily, who rises from the grave claiming that she is now Victor's wife, and spirits him away to the Land of the Dead.

During his time with her, Victor learns that Emily was murdered years ago by an unnamed perpetrator, on the night of her elopement, and he stole the family jewels she had brought (Remains of the Day). After trying to run away, Emily catches up to Victor and there they are properly introduced. Emily reunites Victor with his long deceased dog, Scraps, and they bond. Desperate to return to Victoria, Victor tricks Emily into returning them to the Land of the Living by claiming he wants her to meet his parents. Emily brings Victor to see Elder Gutknecht, the kindly ruler of the underworld, who grants them temporary passage. Victor, feeling guilty for tricking Emily, asks the bride to wait in the forest. He successfully reunites with Victoria by sneaking to her bedroom window (he tried to use the door but couldn't) and confesses his wish to marry her as soon as possible. Before the pair can share a kiss, Emily discovers them and, feeling betrayed and hurt, drags Victor back to the Land of the Dead ("Tears to Shed"). Victoria quickly tries to tell her parents of Victor's situation, but neither believe her and assume he has left her. Against her will, they decide to marry her to a presumed-wealthy visitor named Lord Barkis Bittern, who appeared at the wedding rehearsal.

After reconciling with Emily, Victor learns of Victoria's impending marriage to Barkis from his family's newly deceased coachman. Upset over this news, Victor decides to marry Emily, learning that this will require him to repeat his wedding vows in the Land of the Living and drink a deadly poison in order to join her in death. The dead swiftly prepare for the ceremony and head "upstairs" ("The Wedding Song"), where the town erupts into a temporary panic upon their arrival until everyone recognizes their departed loved ones, and joyously reunite. The chaos causes a panicked Barkis to expose his own poor financial standing and his intentions to marry Victoria only for her supposed wealth, leading her to reject him.

Victoria follows everyone to Victor and Emily's wedding as Victor completes his vows and prepares to drink the poison, only for Emily to stop him when she realizes she is denying Victoria her chance to live happily with him. Just as Emily reunites Victor and Victoria, Barkis arrives to kidnap Victoria. Emily recognizes him as her previous fiancé and reveals he was also her murderer. Victor duels with Barkis to protect Victoria, and Emily intervenes to save Victor's life. Barkis mockingly toasts Emily for dying unwed and unwittingly drinks the poison that Victor nearly took, causing him to die and allowing the dead – who cannot interfere in the affairs of the living – to take retribution against him for his crimes. Emily, now freed from her torment, frees Victor of his vow to marry her and returns his ring, allowing him to marry Victoria, whom she throws her wedding bouquet to. As she steps into the moonlight, she fades away into hundreds of butterflies and flies into the sky, finding peace, as Victor and Victoria watch and embrace.

The critical reaction was generally positive. It even received an Oscar Nomination for Best Animated film but lost to Wallace and Gromit: The Curse of the Wererabbit. Coincidentally, Helena Botham Carter also starred in that movie as lead character Lady Campanula 'Totty' Tottington.

The film itself is based on a Jewish folk tale called "The Finger," both plot lines involve a bridegroom accidentally placing a ring on a finger while practicing their wedding vows.