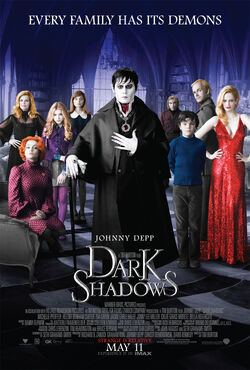 Dark Shadows is Tim Burton's adaptation of the the 1960s gothic soap opera of the same name. The film stars Johnny Depp as the vampire Barnabas Collins. It was released on May 11, 2012[1] in both conventional and IMAX theaters.[2]

In 1760, the Collins family sails from Liverpool, England to North America. The son, Barnabas, grows up to be a wealthy playboy in Collinsport, Maine and is the master of Collinwood Manor. He breaks the heart of a witch, Angelique Bouchard, who turns him into a vampire and buries him alive. In 1972, Barnabas is freed and returns to find his manor in ruin. It is occupied by dysfunctional descendants and other residents, all of whom have dark secrets.[3]

In 1760, young Barnabas Collins and his wealthy family set sail from Liverpool to the New World, establishing the town of Collinsport in Maine and their grand estate, Collinwood. Fifteen years later, Barnabas spurns the advances of his servant, Angelique, secretly a witch. She murders his parents and with the loss of his parents, Barnabus becomes obsessed with dark magic and soon takes up with a beautiful girl named Josette whom he vows to love forever, after seeing them together, Angelique curses Barnabas out of jealousy so that "all he loves will die". Under the spell, his fiancée Josette falls from a cliff to her death; Barnabas throws himself after her but survives, further cursed by Angelique to eternal suffering as a vampire. Angelique turns the town against Barnabas, and buries him alive.

In 1972, Maggie Evans, who bears an uncanny resemblance to Josette, travels to Collinwood to fill the position of governess. She assumes the name Victoria Winters, and meets the dysfunctional Collins descendants: matriarch Elizabeth; her brother Roger; her teenage daughter Carolyn; Roger's young son David, who believes he sees his late mother's ghost; and live-in psychiatrist Dr. Hoffman. That night, Victoria is visited by the ghost of Josette.

While building a restraunt, a construction crew unwittingly frees Barnabas from his tomb; he apologetically feeds on their blood, and makes his way to Collinwood, perplexed by the modern-day technology and fashion he encounters. At the manor, he hypnotizes the caretaker Willie into his service, and reveals to Elizabeth that the legends of her long-lost ancestor are true. Barnabas asks to rejoin the family, and shows Elizabeth the manor's secret passages and hidden treasure. Though wary, she introduces him to the family as a distant relative from England with plans to reclaim the Collins fortune.

Elizabeth and Barnabas use his powers of persuasion and the family treasure to restore the Collins Canning Company and Collinwood to its former glory, as Barnabas adjusts to modern life and falls for Victoria. Angelique, having survived through the centuries and now owner of rival Angel Bay Seafood, is still in love with Barnabas; to protect Victoria, Barnabas gives in to Angelique's lust and they have gravity-defying sex in her office. Afterward, a remorseful Barnabas again rejects Angelique's love.

Barnabas hosts a "happening" at Collinwood for the entire town with Alice Cooper as entertainment. He finds Victoria, who reveals that she has seen the ghost of Josette her entire life; her parents committed her to an asylum because she was not like other girls, but she escaped and was drawn to Collinwood. She returns Barnabas' affections and they kiss, to Angelique's dismay.

Dr. Hoffman learns of Barnabas' true nature, and offers to drain his blood in search of a cure. He soon discovers her using the transfusions to de-age herself, and kills her. He confronts the greedy Roger and offers him a choice: to become a better father to David, or to leave Collinwood with enough money to live out his life elsewhere; Roger chooses the latter. Heartbroken, David is nearly struck by a falling disco ball, but Barnabas saves him with supernatural speed and catches fire in the daylight, revealing himself as a vampire to the shocked household.

Desperate, Barnabas meets with Angelique, who goads him into confessing to his murders, and demands he join her as her paramour. Barnabas refuses, and is again trapped in a coffin. Angelique destroys the Collins’ cannery and, with a recording of Barnabas' confession, rallies the town against the family. David frees Barnabas, who confronts Angelique at Collinwood. They battle, and Angelique enchants the house to turn against the family, despite the efforts of a shotgun-wielding Elizabeth and Carolyn, who outs herself as a werewolf. Angelique reveals that she was responsible for the werewolf that bit Carolyn as an infant and for the deaths of David's mother and Barnabas' parents. The ghost of David's mother incapacitates Angelique, and the household escapes the burning manor. Angelique offers Barnabas her heart, which crumbles as she dies.

He races to the cliff and finds Victoria, unwilling to live as a mortal with him, but he refuses to turn her into a vampire. She steps off the cliff, and he leaps after her, biting her as they plummet to the ground. Victoria awakens in Barnabas’ arms as a vampire, declaring herself Josette, and they passionately embrace.

The camera pans to Dr. Hoffman's corpse in the ocean, whose eyes suddenly flash open.

At the San Diego Comic-Con 2011, it was also confirmed that four actors from the original series will appear in the film. In June 2011, Jonathan Frid, Lara Parker, David Selby and Kathryn Leigh Scott all spent three days at Pinewood Studios to film cameo appearances.[6][7] 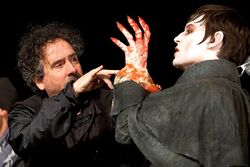 Dark Shadows is directed by Tim Burton based on a screenplay by Seth Grahame-Smith. In July 2007, Warner Bros. acquired film rights for the gothic soap opera Dark Shadows from the estate of its creator Dan Curtis. Actor Johnny Depp was attached to star in the film.[8] The project's development was delayed by the 2007–2008 Writers Guild of America strike. After the strike was resolved, Tim Burton was attached to direct the film.[9] By 2009, screenwriter John August was writing a screenplay for Dark Shadows.[10] In 2010, author and screenwriter Seth Grahame-Smith replaced August in writing the screenplay.[11] Filming began in May 2011. It is taking place entirely in England, both at Pinewood Studios and on location.[3]. Composer Danny Elfman is scoring the film.[3].

In July 2007, Warner Bros. acquired film rights for the gothic soap opera Dark Shadows from the estate of its creator Dan Curtis. Johnny Depp had a childhood obsession with Dark Shadows, calling it a "dream" to portray Barnabas Collins, and ended up persuading Burton to direct. The project's development was delayed by the 2007–2008 Writers Guild of America strike. After the strike was resolved, Tim Burton was attached to direct the film. By 2009, screenwriter John August was writing a screenplay for Dark Shadows. In 2010, author and screenwriter Seth Grahame-Smith replaced August in writing the screenplay. August did, however, receive story credit with Smith for his contribution to the film. Filming began in May 2011. It was filmed entirely in England, at both Pinewood Studios and on location. Depp attempted to emulate the "rigidity" and "elegance" of Jonathan Frid's original Barnabas Collins, but also drew inspiration from Max Schreck's performance in Nosferatu.