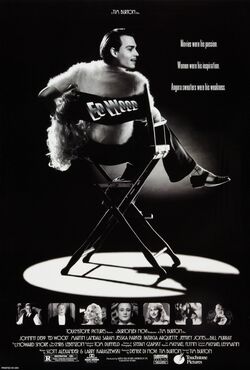 Ed Wood is a 1994 American biographical comedy-drama film directed and produced by Tim Burton and starring Johnny Depp as the eponymous cult filmmaker. The film concerns the period in Wood's life when he made his best-known films as well as his relationship with actor Bela Lugosi, played by Martin Landau. Sarah Jessica Parker, Patricia Arquette, Jeffrey Jones, and Bill Murray are among the supporting cast.

In 1952, Ed Wood is struggling to enter the film industry. Upon hearing of an announcement in Variety magazine that producer George Weiss is trying to purchase Christine Jorgensen's life story, Ed meets with Weiss to direct a now fictionalized film titled I Changed My Sex! but isn't hired. Ed then meets his longtime idol, horror film actor Bela Lugosi, with whom he becomes friends. Ed persuades Weiss to let him direct the film by convincing him that having a star in the film would sell tickets, and they could sign Lugosi for a low price. During production for Glen or Glenda, Ed and Weiss argue over the film's title and subject matter but Weiss eventually plays by Ed's rules, albeit reluctantly. Filming gets going, with the story now about a transvestite. Ed takes to film production with an unusual approach; shooting only one take per scene, giving actors very little direction and using stock footage to fill in gaps. The movie is released to critical and commercial failure, preventing Ed from getting work at Weiss' Screen Classics or making a partnership with Warner Bros. executive Feldman. On the advice of his girlfriend, Dolores Fuller, Ed decides to finance his next film independently. Ed is unsuccessful in finding money for Bride of the Atom, but is introduced to a psychic called The Amazing Criswell who gives him advice on how to sell himself better. During this time, Ed has discovered that Lugosi has developed a morphine addiction.

Ed meets Loretta King, whom he mistakes for a wealthy heiress and asks her to fund the film and ends up casting her as the lead instead of Fuller as planned with Fuller being assigned a more menial role. Filming begins, but is halted when it is revealed that Loretta is actually poor, so Ed convinces meat packing industry tycoon Don McCoy to continue funding the film, who agrees as long as his son is cast as the lead and the film ends with an explosion. When filming wraps up, with the title being changed to Bride of the Monster, Dolores breaks up with Ed after the wrap party because of his circle of misfit friends. Lugosi attempts to conduct a double suicide with Ed after the government cuts off his unemployment benefit, but is talked out of it. Lugosi checks himself into rehab to cure his drug addiction, and Ed meets Kathy O'Hara, who is visiting her father there. He takes her on a date and reveals to her his transvestism, which she accepts. After Lugosi is checked out of rehab, he and Ed shoots a film with Lugosi outside his home. Ed and company (along with TV horror icon Vampira) attend the premiere for Bride of the Monster, an angry mob chases them out of the theater.

Afterwards, Lugosi passes away, leaving Ed without a star. After learning that his landlord, Reynolds' church is struggling to produce several religious films about the twelve apostles, Ed convinces him to allow his church to fund his script for a sci-fi film, Grave Robbers from Outer Space, which could result in a box-office success and generate enough money for Reynolds' dream project. Ed hires Vampira and Kathy's chiropractor Dr. Tom Mason to star in the film (the latter being a stand in for Lugosi) and also has conflicts with the Baptists over the title, script content and Ed's B movie directing style, eventually renaming the film Plan 9 from Outer Space. Ed soon leaves the set out of frustration to go to the nearest bar, where he has a fictional encounter with filmmaker Orson Welles, who rekindles Ed's inspiration by advising him to assert his vision and resist artistic changes imposed onto him by sponsors. Filming finishes with Ed taking action against his producers' wishes. After attending the premiere, Ed and Kathy go to Las Vegas to get married.

Writers Scott Alexander and Larry Karaszewski conceived the idea for a biopic of Ed Wood when they were students at the USC School of Cinematic Arts. Alexander even proposed making a documentary about Wood, The Man in the Angora Sweater, in his sophomore year at USC. However, Karaszewski figured, "there would be no one on the planet Earth who would make this movie or want to make this movie, because these aren't the sort of movies that are made." Irritated at being thought of solely as writers for family films for their work on Problem Child and Problem Child 2, Alexander and Karaszewski wrote a 10-page film treatment for Ed Wood and pitched the idea to Heathers director Michael Lehmann, with whom they attended USC film school. The basis for their treatment came from Rudolph Grey's Nightmare of Ecstasy, a full-length biography, which draws on interviews from Wood's family and colleagues. Lehmann presented their treatment to his producer on Heathers, Denise Di Novi. Di Novi had previously worked with Tim Burton on Edward Scissorhands, Batman Returns and The Nightmare Before Christmas, and a deal was struck with Lehmann as director and Burton and Di Novi producing.

Burton began reading Nightmare of Ecstasy and some of Wood's letters. He was taken by how he "wrote about his films as if he was making Citizen Kane, you know, whereas other people perceived them as, like, the worst movies ever". Burton admits to having always been a fan of Ed Wood, which is why the biopic is filmed with an aggrandizing bias borne of his admiration for Wood's work, rather than the derisive attitude of Wood's detractors. The relationship between Wood and Lugosi in the script echoes closely Burton's relationship with his own idol and two-time colleague, Vincent Price. He said in an interview, "Meeting Vincent had an incredible impact on me, the same impact Ed must have felt meeting and working with his idol." Meanwhile, Burton had been asked to direct Mary Reilly for Columbia Pictures with Winona Ryder in the title role.

However, Burton dropped out of Mary Reilly over Columbia's decision to fast track the film and their interest with Julia Roberts in the title role instead of Ryder. This prompted Burton to become interested in directing Ed Wood himself, on the understanding that it could be done quickly. Lehmann said, "Tim wanted to do this movie immediately and direct, but I was already committed to Airheads." Lehmann was given executive producer credit. Alexander and Karaszewski delivered a 147-page screenplay in six weeks. Burton read the first draft and immediately agreed to direct the film as it stood, without any changes or rewrites. Ed Wood gave Burton the opportunity to make a film that was more character-driven as opposed to style-driven. He said in an interview, "On a picture like this I find you don't need to storyboard. You're working mainly with actors, and there's no effects going on, so it's best to be more spontaneous."

Initially, Ed Wood was in development with Columbia, but when Burton decided he wanted to shoot the film in black-and-white, studio head Mark Canton would not agree to it unless Columbia was given a first-look deal. Burton said black-and-white was "right for the material and the movie, and this was a movie that had to be in black-and-white". He insisted on total creative control, and so in April 1993, a month before the original start date, Canton put Ed Wood into turnaround. The decision sparked interest from Warner Bros., Paramount Pictures and 20th Century Fox in optioning the film rights, but Burton accepted an offer from Walt Disney Studios, who had previously produced The Nightmare Before Christmas. Similar to Nightmare, Disney released Ed Wood under their Touchstone Pictures banner. With a budget of $18 million, Disney did not feel the film was that much of a risk, and granted Burton total creative autonomy. Burton also refused a salary, and was not paid for his work on Ed Wood. Principal photography began in August 1993, and lasted 72 days. Despite his previous six-film relationship with Danny Elfman, Burton chose Howard Shore to write the film score. Under the pressure of finishing the score for Batman Returns, Burton's relationship with Elfman became strained and Burton admitted he and Elfman experienced "creative differences" during The Nightmare Before Christmas.

The movie was filmed at various locations in and around the Los Angeles area.

The critical reaction to Ed Wood was mostly positive.