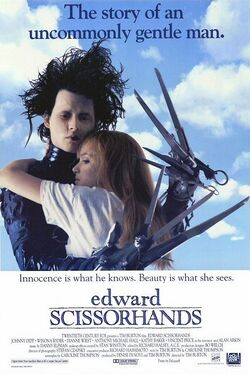 Edward Scissorhands is a 1990 American fantasy romance film directed by Tim Burton. It was produced by Burton and Denise Di Novi, and written by Caroline Thompson from a story by her and Burton. Johnny Depp plays an artificial humanoid named Edward, an unfinished creation who has scissor blades instead of hands. The young man is taken in by a suburban family and falls in love with their teenage daughter Kim (Winona Ryder). Additional roles were played by Dianne Wiest, Anthony Michael Hall, Kathy Baker, Alan Arkin and Vincent Price.

An elderly woman tells her granddaughter the story of a young man named Edward who has scissor blades for hands. As the creation of an old inventor, Edward is a humanoid who is almost completed. The Inventor homeschools Edward, but suffers a heart attack and dies before giving real hands to Edward, leaving him permanently "unfinished".

Many years later, Peg Boggs, a local door-to-door Avon saleswoman, tries to sell at the decrepit Gothic mansion where Edward lives. She finds Edward alone and offers to take him to her home after discovering he is virtually harmless. Peg introduces Edward to her family: her husband Bill, their young son Kevin and their teenage daughter Kim. Edward falls in love with Kim, despite her initial fear of him.

As their neighbors are curious about their new houseguest, the Boggs throw a neighborhood barbecue welcoming Edward. Most of the neighbors are fascinated by Edward and befriend him, except for the eccentric religious fanatic Esmeralda, and Kim's boyfriend Jim. Edward repays the neighborhood for their kindness by trimming their hedges into topiaries. This leads him to discover he can groom dogs' hair and later he styles the hair of the neighborhood women. One of the neighbors, Joyce, offers to help Edward open a hair salon. While scouting a location, Joyce attempts to seduce him, but scares him away. Joyce lies to the neighborhood women that he attempted to seduce her, reducing their trust in him. The bank denies Edward a loan as he does not have a background or financial history.

Jealous of Kim's attraction to Edward, Jim suggests Edward pick the lock on his parents' home to obtain a van for Jim and Kim. Edward agrees, but when he picks the lock, a burglar alarm is triggered. Jim flees and Edward is arrested. The police determine that his period of isolation has left Edward without any sense of reality or common sense. Edward takes responsibility for the robbery, telling Kim he did it because she asked him to. Consequently, Edward is shunned by those in the neighborhood except for the Boggs family.

During Christmas, Edward carves an angelic ice sculpture modeled after Kim; the ice shavings are thrown into the air and fall like snow, a rarity for the neighborhood. Kim dances in the snowfall. Jim arrives and calls out to Edward, surprising him and causing him to accidentally cut Kim's hand. Jim accuses Edward of intentionally harming Kim, but Kim, tired of Jim's jealousy, breaks up with him. Edward flees in a rage, destroying his works and scaring Esmeralda until he is calmed by a stray dog. Kim's parents set out to find Edward while Kim stays behind in case he returns. Edward returns to the Boggs home to find Kim there, who asks him to hold her, but Edward fears he will hurt her. Jim drives around in a drunken rage and nearly runs over Kevin, but Edward pushes Kevin to safety, inadvertently cutting him. Those witnessing the event think that Edward is attacking Kevin and Jim assaults Edward. Edward defends himself, cutting Jim's arm before he flees to the mansion.

Kim races after Edward, while Jim obtains a handgun and follows Kim. In the mansion, Jim ambushes Edward and fights with him; Edward refuses to fight back until he sees Jim slap Kim as she attempts to intervene. Enraged, Edward stabs Jim in the stomach and pushes him from a window of the mansion, killing him. Kim confesses her love to Edward and kisses him before departing. As the neighbors gather, Kim convinces them that Jim and Edward killed each other.

The elderly woman finishes telling her granddaughter the story, revealing that she is Kim and saying that she never saw Edward again. She prefers not to visit him because decades have passed and she wants him to remember her as she was in her youth. She believes Edward is still alive, immortal because he is artificial, and because of the "snow", which Edward creates when carving ice sculptures.

The genesis of Edward Scissorhands came from a drawing by then-teenaged director Tim Burton, which reflected his feelings of isolation and being unable to communicate to people around him in suburban Burbank. The drawing depicted a thin, solemn man with long, sharp blades for fingers. Burton stated that he was often alone and had trouble retaining friendships. "I get the feeling people just got this urge to want to leave me alone for some reason, I don't know exactly why." During the pre-production of Beetlejuice, Burton hired Caroline Thompson, then a young novelist, to write the Edward Scissorhands screenplay as a spec script. Burton was impressed with her short novel, First Born, which was "about an abortion that came back to life". Burton felt First Born had the same psychological elements he wanted to showcase in Edward Scissorhands. "Every detail was so important to Tim because it was so personal", Thompson remarked. She wrote Scissorhands as a "love poem" to Burton, calling him "the most articulate person I know, but couldn't put a single sentence together".

Shortly after Thompson's hiring, Burton began to develop Edward Scissorhands at Warner Bros., with whom he worked on Pee-wee's Big Adventure and Beetlejuice. However, within a couple of months, Warner sold the film rights to 20th Century Fox. Fox agreed to finance Thompson's screenplay while giving Burton complete creative control. At the time, the budget was projected to be around $8–9 million. When writing the storyline, Burton and Thompson were influenced by Universal Horror films, such as The Hunchback of Notre Dame (1923), The Phantom of the Opera (1925), Frankenstein (1931), and Creature from the Black Lagoon (1954), as well as King Kong (1933) and various fairy tales. Burton originally wanted to make Scissorhands as a musical, feeling "it seemed big and operatic to me", but later dropped the idea. Following the enormous success of Batman, Burton arrived at the status of being an A-list director. He had the opportunity to do any film he wanted, but rather than fast track Warner Bros.' choices for Batman Returns or Beetlejuice Goes Hawaiian, Burton opted to make Edward Scissorhands for Fox.

Burbank, California was considered as a possible location for the suburban neighborhoods, but Burton believed the city had become too altered since his childhood so the Tampa Bay Area of Florida, including the town of Lutz, inside of the subdivision named Carpenter's Run, and the Southgate Shopping Center of Lakeland was chosen for a three-month shooting schedule. The production crew found, in the words of the production designer Bo Welch, "a kind of generic, plain-wrap suburb, which we made even more characterless by painting all the houses in faded pastels, and reducing the window sizes to make it look a little more paranoid." The key element to unify the look of the neighborhood was Welch's decision to repaint each of the houses in one of four colors, which he described as "sea-foam green, dirty flesh, butter, and dirty blue". The facade of the Gothic mansion was built just outside Dade City. Filming Edward Scissorhands created hundreds of (temporary) jobs and injected over $4 million into the Tampa Bay economy. Production then moved to a Fox Studios sound stage in Century City, California, where interiors of the mansion were filmed.

To create Edward's scissor hands, Burton employed Stan Winston, who would later design the Penguin's prosthetic makeup in Batman Returns. Depp's wardrobe and prosthetic makeup took one hour and 45 minutes to apply. The giant topiaries that Edward creates in the film were made by wrapping metal skeletons in chicken wire, then weaving in thousands of small plastic plant sprigs. Rick Heinrichs worked as one of the art directors.

Edward Scissorhands was released to positive reception from critics and was a financial success, grossing over four times its $20 million budget.

Retrieved from "https://timburton.fandom.com/wiki/Edward_Scissorhands?oldid=12259"
Community content is available under CC-BY-SA unless otherwise noted.