Land of the Dead, or 'downstairs'

Helena Bonham Carter
Emily is the titular "corpse bride" from the film Corpse Bride. She was Victor Van Dort's accidental wife by brief time, also she really loved him. Or just his girlfriend but he said I do after his speech to set her free.

Relationships with other characters[]

Victor Van Dort- Emily first encountered Victor as he "married" Emily by placing his ring on her finger, thinking it was a tree root. She then brings her new "husband" to the lively underworld and watches as Bone Jangles tells her story through the song "Remains Of The Day". As a present, she gives Victor his dog, now a skeleton. However, Victor tricks her into bringing them into the world of the living by telling her that he would introduce her to his parents.

After tracking his footsteps, Emily then finds out Victor went to find Victoria and actually intended to ditch her. Furious, she drags him back to the underworld where she tearfully berates him and leaves. They both make it up through a piano duet. She then realizes that she and Victor aren't actually married, due to the fact that the vows say "'Til death do we part". Victor also realizes this and decides to actually propose to Emily 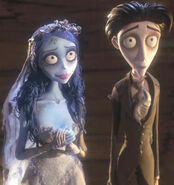 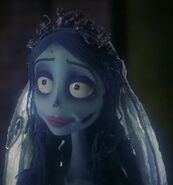 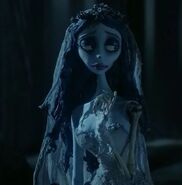