The Joker (Real Name: Jack Napier) was a disfigured and deranged mob boss in Gotham City. He was eventually defeated by Batman. He was also the main antagonist of Batman (1989 film).

Jack Napier had been destined for a life of crime at an early age, starting his criminal career as a juvenile delinquent. His early scrapes with the law got him sent to youth facilities where he was analyzed by doctors, who noted an aptitude for art and science and detachment from emotion or relationships, which were red flags for psychopathic tendencies. Eventually Jack fell in with organized crime, and at one point had murdered Martha and Thomas Wayne as they had the misfortune of taking their son to the movies at the same time Jack and an accomplice were committing a crime. Jack murdered Mr. & Mrs. Wayne in order to eliminate any possible witnesses, but decided to spare their minor son, Bruce, as his accomplice urged him to get going. Jack decided to intimidate the little boy by flashing a sly, evil grin and remarking "you ever dance with the devil in the pale moonlight?" Unknown to Jack, he effectively signed his death warrant as he instigated a chain reaction of events, although one that would take many years before he met his doom. The young boy was determined to avenge his parents and prevent other innocent civilians from suffering the same fate. Decades passed and Jack Napier aged. He also rose in the ranks of the mafia, becoming consigliere to mob boss Carl Grissom. Along with his advance into middle adulthood, his psychotic personality had been buried, replaced by a sarcastic, grumpy outlook. When the new District Attorney made a press conference vowing to take down Grissom and make Gotham City "a place for decent people to live", Napier, who had been watching the press conference on TV, snidely remarked "Decent people should live somewhere else".

Napier battled in a gun fight with Batman at Axis Chemicals when he fired a bullet that dodged off of Batman's gauntlet and hit him, resulting in him to fall in a pool of acid. His face turned white and his hair turned green. Thus, The Joker was born, a major criminal in Gotham City who is known for putting humor into his killings.

His main source of killing is using a gas called Joker Venom to make innocent victims have a face-freezing smile on their faces that lasts for a while until the person most likely dies. 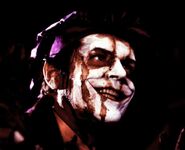 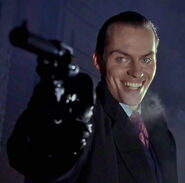 Napier with his mistress, Alicia Hunt.

Napier being warned by Alicia what his boss, Carl Grissom will do if he learns of his affair with her.

Napier assuring Alicia that Grissom doesn't know about their affair.

Napier admiring his reflection in a mirror.

Napier going to talk to Eckhardt.

"Brought you a little snack, Eckhardt."

"Why, Eckhardt, you ought to think about the future."

Napier getting angry when Eckhardt insults him.

At a meeting, Napier suggests that the evidence Grissom's mob has at Axis Chemicals be taken out.

Napier assigned by Grissom to destroy the evidence at Axis Chemicals.

Napier secretly being flirted by Alicia who returns from a shopping spree.

After the meeting ends, Napier takes the opportunity to talk to Grissom.

Napier asking Grissom if somebody else to take over the assignment at Axis Chemicals.

Napier convinced by Grissom to do the assignment.

At Axis Chemicals, Jack discovers all the evidence has already been removed.

"We've been ratted out here, boys."