Winona Ryder
Lydia Deetz is Charles Deetz' daughter and the stepdaughter of Delia Deetz and a friend of Adam and Barbara Maitland.

Lydia is shown with jet black hair which she often wears in a bushy ponytail with long parted bangs. She wears pale face makeup and peach eye shadow around her eyelids, under her eyebrows and above her cheekbones.

Lydia is a serious but kind girl who is sensitive beyond her Goth dress and feels isolated in the world. Her father and stepmother don’t take anything she says seriously and often ignore her for their own selfish pursuits. Lydia loves writing poetry, taking photographs and loves anything pertaining to the supernatural and paranormal. Despite her young age, Lydia appears to be the most sensible member of the Deetz household. By the end of the film, she is more happy and well-adjusted because Adam and Barbara Maitland become active parental figures alongside Charles and Delia Deetz, who take a stronger role in her upbringing after having seen her nearly forced into marriage with Beetlejuice. 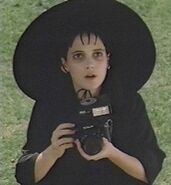 Lydia taking a picture of Barbara and Adam.

Lydia in the Maitland's attic.

Lydia in the Beetlejuice TV Series.

Lydia during the 'Day-O' scene.
Add a photo to this gallery
Retrieved from "https://timburton.fandom.com/wiki/Lydia_Deetz?oldid=11092"
Community content is available under CC-BY-SA unless otherwise noted.