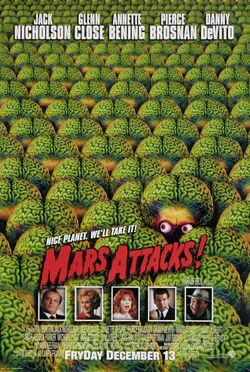 Martians take delight in taking over the Earth, and most weapons fail. However, the Martians overplay their hand as they do not anticipate an unlikely attack.

In Kentucky, a family watches in confusion as a herd of cattle starts running past their home, on fire. A spaceship is then seen departing Earth and returning to Mars, where it gathers hundreds of other Martianships and heads back to Earth. President James Dale, along with his aides, addresses the United States concerning the historic event. The President's science aides set up a first contact meeting with the Martians in Pahrump, Nevada as President Dale watches the development on TV with his wife Marsha and his daughter Taffy.

Using a translation machine, the Ambassador of Mars announces that they "come in peace". However, this turns out completely false. When a hippie releases a dove as a symbol of peace, the Ambassador shoots it before he and the other Martians slaughter most of the people at the event, including General Casey, news reporter Jason Stone, and Billy-Glenn Norris, before capturing chat-show host Nathalie Lake and her pet Chihuahua.

Thinking that the Martians assumed that the dove was a symbol of war, President Dale tells Professor Donald Kessler to renegotiate with the Martians, whose Ambassador later requests to address the United States Congress. At this meeting, the Martians massacre most of Congress. Kessler begs the Martian Ambassador to stop, but is knocked unconscious and taken aboard their ship, where he is later shown with his body parts dismembered and his disembodied head remaining animated. General Decker tries to convince President Dale to retaliate with nuclear warfare, but the President refuses.

After a failed attempt to assassinate President Dale in which a disguised Martian is killed, the Martians invade Earth in droves, starting with Washington, D.C. and quickly spreading around the globe. As they attack the White House, the Secret Service evacuates the President, but the First Lady is crushed to death by the Nancy Reagan chandelier and Taffy is separated from them during the chaos. After the President of Franceis assassinated by the Martians and the Martians have defaced a variety of world landmarks, the U.S. government attempts a nuclear attack on the Martian mother ship that night, but that proves futile and the Martians continue destroying Earth and its inhabitants. Eventually, the Martian Leader and his bodyguards breach the bunker where Dale has been taken, and the former reduces Decker to the size of an insect before killing him. The Martians kill everyone else in the bunker except for Dale, who makes an impassioned speech in an attempt to plea for peace and his life. The Martian Leader appears to be moved by the speech and deceptively appears to agree to a truce with Dale, but then uses a gadget disguised as a hand to kill him.

As the Martians ravage Las Vegas, Byron Williams, a former world champion boxer, leads a small group of survivors consisting of Barbara Land, Tom Jones, a waitress named Cindy, and a lawyer to an airfield in the hopes of flying a small jet procured by Land to safety. They barely make it, losing the lawyer in the process, but discover a large group of Martians stationed there as they are preparing to take off, the Ambassador among them. Byron creates a diversion by challenging them to a fistfight. While he succeeds in killing the Ambassador, he is outnumbered and overwhelmed, but Tom, Barbara, and Cindy escape.

Billy-Glenn's brother Richie discovers that the Martians' heads explode when they hear Slim Whitman's "Indian Love Call" when he goes to rescue his grandmother, Florence. Richie and Florence then drive around town, using the song to kill Martians, and broadcast the song on a local radio station. Thereafter, armed forces broadcast the song around the globe, killing the Martian leader and most if not all of the other Martians. Nathalie and Kessler's disembodied heads kiss while the Martian spaceship they are on crashes into the ocean.

In the aftermath, Richie and Florence are awarded the Medal of Honor by Taffy, presumably the only surviving member of the government. Byron, who survived the Martian brawl, arrives in D.C. to reunite with his former wife and their two sons as the devastation is being cleaned up. Barbara, Cindy, and Tom Jones emerge from a cave with some ridiculously tame wild animals to see dozens of crashed Martian ships in Lake Tahoe. Tom Jones begins singing his signature song ″It's Not Unusual″.

In 1985, Alex Cox pitched the idea of a film based on the Mars Attacks trading card series as a joint-production to Orion and Tristar Pictures. He wrote three drafts over the next four years, but was replaced by Martin Amis before Orion/Tristar placed Mars Attacks in turnaround.

Jonathan Gems, who had previously written multiple unproduced screenplays for director Tim Burton, came up with his own idea for a Mars Attacks film in 1993. The writer pitched both concepts of Mars Attacks and Dinosaurs Attack! to Burton, who both decided that Dinosaurs Attack! would be too similar to Jurassic Park (1993). Burton, who was busy preparing Ed Wood (1994), believed that Mars Attacks! would be a perfect opportunity to pay homage to the films of Edward D. Wood, Jr., especially Plan 9 from Outer Space (1959), and other 1950s science fiction B movies, such as Invaders from Mars (1953), It Came from Outer Space (1953), The War of the Worlds (1953), Target Earth (1954), Invasion of the Body Snatchers (1956) and Earth vs. the Flying Saucers (1956).

Burton set Mars Attacks! up with Warner Bros. and the studio purchased the film rights to the trading card series on his behalf. The original theatrical release date was planned for the summer of 1996. Gems completed his original script in 1994, which was budgeted by Warner Bros. at $260 million. The studio wanted to make the film for no more than $60 million. After turning in numerous drafts in an attempt to lower the budget, Gems was replaced by Ed Wood writers Scott Alexander and Larry Karaszewski.

Gems eventually returned to the project, writing a total of 12 drafts of the script. Although he is credited with both the screen story and screenplay of Mars Attacks!, Gems dedicates his novelization of the movie to Burton, who "co-wrote the screenplay and didn't ask for a credit". Warner Bros. was dubious of the Martian dialogue and wanted Burton to add closed captioning subtitles, but he resisted. Working with Burton, Gems pared the film's 60 leading characters down to 23, and the worldwide destruction planned for the film was isolated to three major cities. Scenes featuring Martians attacking China, the Philippines, Japan, Europe, Africa, India, and Russia were deleted from the screenplay. "Bear in mind this was way before Independence Day (1996) was written," Gems commented. "We had things like Manhattan being destroyed building by building, the White House went and so did the Empire State Building. Warner Bros. figured all this would be too expensive, so we cut most of that out to reduce the cost." Howard Stern claimed that the film's climax, where an attack by Martians was thwarted by playing Slim Whitman songs to them, was originally created by him when he worked at WNBC in 1982, in a sketch named "Slim Whitman vs. The Midget Aliens From Mars." As Burton listened to the sketch while being interviewed by Stern, he dismissed it as mere coincidence.

The decision to hire an A-list ensemble cast for Mars Attacks! parallels the strategy Irwin Allen used for his disaster films, notably The Poseidon Adventure (1972) and The Towering Inferno (1974). Jack Nicholson, approached for the role of the President, jokingly remarked that he wanted to play all the roles. Burton agreed to cast Nicholson as both Art Land and President Dale, specifically remembering his positive working relationship with the actor on Batman.

Susan Sarandon was originally set to play Barbara Land before Annette Bening was cast. Bening modeled the character after Ann-Margret's performance in Viva Las Vegas (1964). Hugh Grant was the first choice for Professor Donald Kessler, a role which eventually went to Pierce Brosnan. Meryl Streep, Diane Keaton and Stockard Channing were considered for First Lady Marsha Dale, but Glenn Close won the role. In addition to Nicholson, other actors who reunited with Burton on Mars Attacks! include Sylvia Sidney from Beetlejuice (1988), O-Lan Jones from Edward Scissorhands (1990) and Danny DeVito from Batman Returns (1992), continuing Burton's trend of recasting actors several times from his previous works.

The originally scheduled start date was mid-August 1995, but filming was delayed until February 26, 1996. Director Tim Burton hired Peter Suschitzky as the cinematographer, because he was a fan of his work in David Cronenberg's films. Production designer Thomas Wynn (A Beautiful Mind, Malcolm X) intended to have the war room pay tribute to Dr. Strangelove (1964). During production, Burton insisted that the art direction, cinematography and costume design of Mars Attacks! incorporate the look of the 1960s trading cards.

On designing the Martian (played by Burton's girlfriend Lisa Marie Smith) who seduces and kills Jerry Ross (Martin Short), costume designer Colleen Atwood took combined inspiration from the playing cards, Marilyn Monroe, the work of Alberto Vargas and Jane Fonda in Barbarella (1968). Filming for Mars Attacks! ended on June 1, 1996. The film score was composed by Burton's regular composer Danny Elfman, to whom Burton was reconciled after a quarrel that occurred during The Nightmare Before Christmas (1993), for which they did not co-operate in producing Ed Wood (1994). Elfman enlisted the help of Oingo Boingo lead guitarist Steve Bartek to help arrange the compositions for the orchestra. 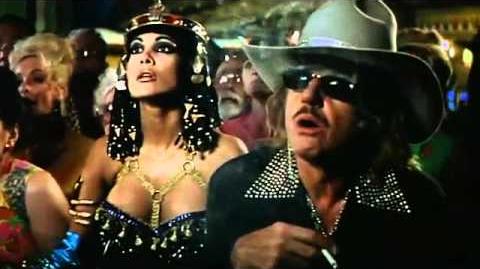 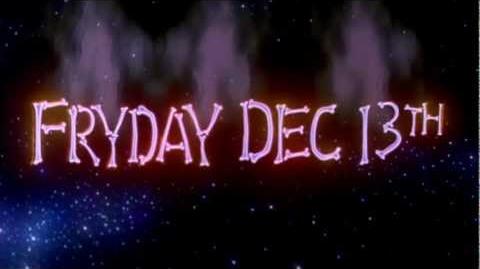 Mars Attacks! Official Trailer 2
Add a photo to this gallery
Retrieved from "https://timburton.fandom.com/wiki/Mars_Attacks!?oldid=10988"
Community content is available under CC-BY-SA unless otherwise noted.