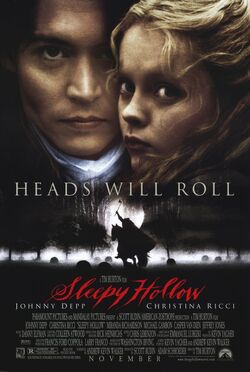 In 1799, New York City police constable Ichabod Crane is dispatched to the upstate Dutch hamlet of Sleepy Hollow, which has been plagued by a series of brutal decapitations: a wealthy father and son, Peter and Dirk Van Garrett, and a widow, Emily Winship. Received by the insular town elders—wealthy businessman Baltus Van Tassel; town doctor Thomas Lancaster; the Reverend Steenwyck; notary James Hardenbrook; and magistrate Samuel Philipse—Ichabod learns that locals believe the killer is the undead apparition of a headless Hessian mercenary from the American Revolutionary War who rides a black steed in search of his missing head.

Ichabod begins his investigation, skeptical of the paranormal story. Boarding at the home of Baltus Van Tassel and his second wife, Lady Van Tassel, he is taken with Baltus' spiritual daughter, Katrina. When a fourth victim, Jonathan Masbath, a servant in the Van Garrett household, is killed, Ichabod takes the victim's son, Young Masbath, under his wing. Ichabod and Masbath exhume the victims on a tip from Philipse, learning that the widow died pregnant. After Philipse tells this to Ichabod, the horseman comes and decapitates Philipse, before absconding with his head. Ichabod, Young Masbath and Katrina, venture into the Western Woods, where a witch living in a cave reveals the location of the Horseman's grave at the "Tree of the Dead." He digs up the Horseman's grave and discovers the skull has been taken, deducing that it has been stolen by someone who now controls him and that the tree is his portal into the living world.

That night, the Horseman kills village midwife Beth Killian and her family, as well as Katrina's suitor Brom Van Brunt when he attempts to intervene; Ichabod hypothesizes that the Horseman is attacking select targets linked by a conspiracy. He and Masbath visit Hardenbrook, who reveals that the first victim, Peter Van Garrett, had secretly married the widow, writing a new will that left his estate to her and her unborn child. Ichabod deduces that all the victims (except Brom) are either beneficiaries or witnesses to this new will, and that the Horseman's master is the person who would have otherwise inherited the estate: Baltus, a Van Garrett relative.

Upon discovering the accusation, Katrina burns the evidence. Hardenbrook commits suicide, and Steenwyck convenes a town meeting to discredit Ichabod, but Baltus bursts into the assembly at the church, announcing that the Horseman has killed his wife. The Horseman attacks the church, but is unable to enter. In the chaos, the remaining elders turn on each other. Steenwyck kills Lancaster, and is in turn killed by Baltus, who is then suddenly harpooned by the Horseman who drags him through a window and out of the church, and acquires his head.

Initially concluding that Katrina controls the Horseman, Ichabod discovers that the diagram she drew beneath his bed and in the church during the meeting, which he believed summoned the Horseman, is really one of protection, and additionally finds a post-mortem wound on "Lady Van Tassel's" decapitated body. Lady Van Tassel, alive and well, emerges from the shadows and reveals herself to Katrina as the master of the Horseman. She faked her death and used the planted headless body of the Van Tassel's servant girl, Sarah, whom she had killed previously. She takes Katrina to a local windmill and explains her true heritage from an impoverished family evicted years ago by Peter Van Garrett, when he favored Baltus and his family instead. She swore revenge against Van Garrett and all who had wronged her family, pledging herself to Satan if he would raise the Horseman to avenge her by killing them, which would also allow her to claim the Van Garrett and Van Tassel estates uncontested. Manipulating her way into the Van Tassel household, she used fear, blackmail, and lust to manipulate the other elders into her plot. Having eliminated all other heirs and witnesses, as well as her sister – the crone witch – for aiding Ichabod, she summons the Horseman to finish Katrina.

In 1993, Kevin Yagher, a make-up effects designer who had turned to directing with Tales from the Crypt, had the notion to adapt Washington Irving's short story "The Legend of Sleepy Hollow" into a feature film. Through his agent, Yagher was introduced to Andrew Kevin Walker; they spent a few months working on a film treatment that transformed Ichabod Crane from a schoolmaster from Connecticut to a banished New York City detective. Yagher and Walker subsequently pitched Sleepy Hollow to various studios and production companies, eventually securing a deal with producer Scott Rudin, who had been impressed with Walker's unproduced spec script for Seven. Rudin optioned the project to Paramount Pictures in a deal that had Yagher set to direct, with Walker scripting; the pair would share story credit. Following the completion of Hellraiser: Bloodline, Yagher had planned Sleepy Hollow as a low-budget production—"a pretentious slasher filmwith a spectacular murder every five minutes or so." Paramount disagreed on the concept and demoted Yagher's involvement to prosthetic makeup designer. "They never really saw it as a commercial movie," producer Adam Schroeder noted. "The studio thinks 'old literary classic' and they think The Crucible. We started developing it before horror movies came back."

Paramount CEO Sherry Lansing revived studio interest in 1998. Schroeder, who shepherded Tim Burton's Edward Scissorhands as a studio executive at 20th Century Fox in 1990, suggested that Burton direct the film. Francis Ford Coppola's minimal production duties came from American Zoetrope; Burton only became aware of Coppola's involvement during the editing process when he was sent a copy of Sleepy Hollow's trailer and saw Coppola's name on it. Burton, coming off the troubled production of Superman Lives, was hired to direct in June 1998. "I had never really done something that was more of a horror film," he explained, "and it's funny, because those are the kind of movies that I like probably more than any other genre." His interest in directing a horror film influenced by his love for Hammer Film Productions and Black Sunday—particularly the supernatural feel they evoked as a result of being filmed primarily on sound stages.As a result, Sleepy Hollow is a homage to various Hammer Film Productions, including Dr. Jekyll and Sister Hyde, and other films such as Frankenstein, Bride of Frankenstein, various Roger Corman horror films, Jason and the Argonauts, Scream Blacula Scream and of course Hammer's Dracula. The image of the Headless Horseman had fascinated Burton during his apprenticeship as a Disney animator at CalArts in the early 1980s. "One of my teachers had worked on the Disney version as one of the layout artists on the chase, and he brought in some layouts from it, so that was exciting. It was one of the things that maybe shaped what I like to do." Burton worked with Walker on rewrites, but Rudin suggested that Tom Stoppard rewrite the script to add to the comical aspects of Ichabod's bumbling mannerisms, and emphasize the character's romance with Katrina. His work went uncredited through the WGA screenwriting credit system.

The original intention had been to shoot Sleepy Hollow predominantly on location with a $30 million budget. Towns were scouted throughout Upstate New York along the Hudson Valley, and the filmmakers decided on Tarrytown for an October 1998 start date. The Historic Hudson Valley organization assisted in scouting locations, which included the Philipsburg Manor House and forests in the Rockefeller State Park Preserve. "They had a wonderful quality to them," production designer Rick Heinrichs reflected on the locations, "but it wasn't quite lending itself to the sort of expressionism that we were going for, which wanted to express the feeling of foreboding." Disappointed, the filmmakers scouted locations in Sturbridge, Massachusetts, and considered using Dutch colonial villages and period town recreations in the Northeastern United States. When no suitable existing location could be found, coupled with a lack of readily available studio space in the New York area needed to house the production's large number of sets, producer Scott Rudin suggested the UK.

Rudin believed Britain offered the level of craftsmanship in period detail, painting and costuming that was suitable for the film's design.Having directed Batman entirely in Britain, Burton agreed, and designers from Batman's art department were employed by Paramount for Sleepy Hollow. As a result, principal photography was pushed back to November 20, 1998 at Leavesden Film Studios, which had been recently vacated by Star Wars: Episode I – The Phantom Menace. The majority of filming took place at Leavesden, with studio other work at Shepperton Studios, where the massive Tree of the Dead set was built using Stage H. Production then moved to the Hambleden estate at Lime Tree Valley for a month-long shoot in March, where the town of Sleepy Hollow was constructed. "We came to England figuring we would find a perfect little town," producer Adam Schroeder recalled, "and then we had to build it anyway." Filming in Britain continued through April, and a few last minute scenes were shot using a sound stage in Yonkers, New York the following May.

Film review aggregator Rotten Tomatoes reports that 69% of critics gave the film a positive review based on 122 reviews with an average rating of 6.3/10. The site's critics consensus states, "It isn't Tim Burton's best work, but Sleepy Hollow entertains with its stunning visuals and creepy atmosphere." Metacritic, another review aggregator, assigned the film a weighted average score of 65 out of 100 based on 35 reviews from mainstream critics, considered to be "generally favorable". Audiences polled by CinemaScore gave the film an average grade of "B-" on an A+ to F scale.

Roger Ebert praised Johnny Depp's performance and Tim Burton's methods of visual design. "Johnny Depp is an actor able to disappear into characters," Ebert continued, "never more readily than in one of Burton's films." Richard Corliss wrote, in his review for Time, "Burton's richest, prettiest, weirdest [film] since Batman Returns. The simple story bends to his twists, freeing him for an exercise in high style."

David Sterritt of The Christian Science Monitor highly praised Burton's filmmaking and the high-spirited acting of cast, but believed Andrew Kevin Walker's writing was too repetitious and formulaic for the third act.

Owen Gleiberman from Entertainment Weekly wrote Sleepy Hollow is "a choppily plotted crowd-pleaser that lacks the seductive, freakazoid alchemy of Burton's best work." Gleiberman compared the film to The Mummy, and said "it feels like every high-powered action climax of the last 10 years. Personally, I'd rather see Burton so intoxicated by a movie that he lost his head."