The Nightmare Before Christmas (film)

Edit
The Nightmare Before Christmas 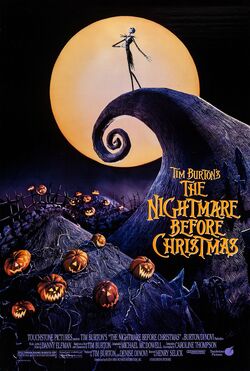 "Halloween Town" is a dream world filled with citizens such as ghosts, ghouls, vampires, werewolves, witches, monsters, and deforms. Jack Skellington, "king of the pumpkin patch", is a respected entertainer amongst the citizens and grows tired of the repetitive yearly celebration of Halloween. He wanders in the wilderness, where he accidentally opens a portal to "Christmas Town". Impressed by the feeling and style of Christmas, Jack presents the culture to the citizens of Halloween Town of his slightly inaccurate impressions. While Jack may slightly understand Christmas, the townspeople fail to do so and compare everything Jack says to their ideas of Halloween. Nonetheless the townspeople agree to celebrate Christmas and take over the holiday.

Jack's obsession with Christmas leads him to usurp the role of Santa Claus. Every resident is assigned a task, while Sally, a rag doll-type resident, begins a romantic attraction towards Jack. However, she alone fears that his plans will become disastrous. Jack then assigns Lock, Shock, and Barrel, a trio of mischievous children to abduct Santa and take him to Halloween Town. Against Jack's wishes and largely for their amusement, the trio deliver Santa to Oogie Boogie, a gambling-addict bogeyman who plots to play a game with Santa's life as the stake.

Christmas Eve arrives and Sally attempts to stop Jack, but he embarks into the sky on a coffin-like sled pulled by skeletal reindeer, hoping to deliver presents to children around the world. As Jack begins delivering gifts, children are horrified by their monstrous, which include shrunken heads, man-eating wreaths, vampiric teddy bears, 30-foot snakes, and pull-string ducks dotted with bloody bullet holes. Their parents believe Jack to be an imposter attempting to imitate Santa, and the military is commissioned to shoot Jack out of the sky. He is presumed dead by the Halloween citizens, but eventually is shown to be alive. Although he is initially depressed by the destruction he had caused, he realizes he is still the ruler of Halloween Town and can bring joy to the world in his own way.

Sally attempts to free Santa, only to be captured by Oogie Boogie. With the climax ensuing, Jack rescues Sally and Santa and defeats Oogie Boogie. Santa reprimands Jack before setting off to save Jack's Christmas mistakes. Santa flies over Halloween Town and gives it snow as a gift to the town, signifying that there be no hard feelings between him and Jack. The townspeople are confused at first, but start to play in the snow. The film ends with Jack and Sally sharing a kiss on a spiral hill over the cemetery.

Main article: List of characters in The Nightmare Before Christmas

Burton wrote a three-page poem titled The Nightmare Before Christmas when he was a Disney animator in the early-1980s. Burton took inspiration from television specials of Rudolph the Red-Nosed Reindeer, How the Grinch Stole Christmas! and the poem A Visit from St. Nicholas. With the success of Vincent in 1982, Disney started to consider The Nightmare Before Christmas as either a short subject or 30-minute Holiday television special. Rick Heinrichs and Burton created concept art and storyboards, with Heinrichs also sculpting character models. "Back then, I would have done anything to get the project off ground," Burton explained. "There was a lot of talk of either a short film, like Vincent or a TV special, but it went nowhere. I also wanted to have Vincent Price as narrator." Burton showed Henry Selick, who was also a Disney animator in the early-1980s, the material him and Heinrichs developed.

Over the years, Burton's thoughts regularly returned to the project. In 1990, Burton found out that Disney still owned the film rights, and the two committed to produce a full-length film with Selick as director. Disney was looking forward to Nightmare "to show capabilities of technical and storytelling achievements that were present in Who Framed Roger Rabbit." Nightmare marked Burton's third film in a row to have a Christmas setting. Burton could not direct because of his commitment to Batman Returns and he did not want to be involved with "the painstakingly slow process of stop-motion". To adapt his poem into a screenplay, Burton approached Michael McDowell, his collaborator on Beetlejuice. McDowell and Burton experienced creative differences, which convinced Burton to make the film as a musical with lyrics and compositions by frequent collaborator Danny Elfman. Elfman and Burton created a rough storyline and two-thirds of the film's songs, while Selick and his team of animators began production in July 1991 in San Francisco, California with a crew of 200 workers. Joe Ranft worked as a storyboard artist.

Elfman found writing Nightmare's 10 songs as "one of the easiest jobs I've ever had. I had a lot in common with Jack Skellington." Caroline Thompson still had yet to be hired to write the screenplay. With Thompson's screenplay, Selick stated, "there are very few lines of dialogue that are Caroline's. She became busy on other films and we were constantly rewriting, reconfiguring and developing the film visually." The work of Ray Harryhausen, Ladislas Starevich, Edward Gorey, Charles Addams, Jan Lenica, Francis Bacon and Wassily Kandinsky influenced the filmmakers. Selick described the production design as akin to a pop-up book. In addition, Selick stated, "When we reach Halloween Town, it's entirely German Expressionism. When Jack enters Christmas Town, it's an outrageous Dr. Seuss setpiece. Finally, when Jack is delivering presents in the "Real World", everything is plain, simple, and perfectly aligned."

On the direction of the film, Selick reflected, "It's as though he [Burton] laid the egg, and I sat on it and hatched it. He wasn't involved in a hands-on way, but his hand is in it. It was my job to make it look like "a Tim Burton film", which is not so different from my own films." When asked on Burton's involvement, Selick claimed, "I don't want to take away from Tim, but he was not in San Francisco when we made it. He came up five times over two years, and spent no more than eight or ten days in total." Walt Disney Animation Studios contributed with some use of second-layering traditional animation. Burton found production somewhat difficult because he was directing Batman Returns and in pre-production of Ed Wood.

Walt Disney Pictures decided to release the film under their Touchstone Pictures banner because they thought Nightmare would be "too dark and scary for kids". Selick remembered, "Their biggest fear, and why it was kind of a stepchild project, was they were afraid of their core audience hating the film and not coming. It wasn't too dark, too scary. Kids love to get scared. In fact, I don't think it's too scary at all. Even little, little kids, as young as three, a lot of them love that film and respond well to it." To help market the film "it was released as Tim Burton's The Nightmare Before Christmas," Burton explained. "But it turned more into more of a brand-name thing, it turned into something else, which I'm not quite sure about."

Around the release of the film, Touchstone president David Hoberman quoted, "I hope Nightmare goes out and makes a fortune. If it does, great. If it doesn't, that doesn't negate the validity of the process. The budget was less than any Disney blockbuster so it doesn't have to earn Aladdin-sized grosses to satisfy us." The film premiered at the New York Film Festival on October 9. Tim Burton's The Nightmare Before Christmas was given a limited release on October 15, 1993, before being wide released on October 29. The film earned $50 million in its first theatrical run.

Danny Elfman was worried the characterization of Oogie Boogie would be considered racist by National Association for the Advancement of Colored People (NAACP). Elfman's predictions became true. However, director Henry Selick stated the character was inspired from the Betty Boop cartoon The Old Man of the Mountain. "Cab Calloway would dance his inimitable jazz dance and sing "Minnie the Moocher" or "Old Man of the Mountain", and they would rotoscope him, trace him, turn him into a cartoon character, often transforming him into an animal, like a walrus," Selick continued. "I think those are some of the most inventive moments in cartoon history, in no way racist, even though he was sometimes a villain. We went with Ken Page, who is a black singer and he had no problem with it". The film was nominated for both the Academy Award for Visual Effects and the Hugo Award for Best Dramatic Presentation, but lost both categories to Jurassic Park. Nightmare won the Saturn Award for Best Fantasy Film, while Elfman won Best Music. Selick and the animators were also nominated for their work. Elfman lost the Golden Globe Award for Best Original Score to Kitarō of Heaven & Earth.

With successful home video sales, Nightmare achieved the ranks of being a cult film. Walt Disney Studios Home Entertainment first released the film on VHS in March 3, 1994. And On DVD in March 3, 2000. It contained special features. Nightmare was released a second time in October 2000 as a special edition. The release included audio commentary by Selick and cinematographer Pete Kozachik, a 28-minute making-of documentary, gallery of concept art and storyboards, test footage and deleted scenes. Burton's Vincent and Frankenweenie were also included. On October 20, 2006, Disney reissued Nightmare (under Touchstone Pictures) with conversion to Disney Digital 3-D. Industrial Light & Magic assisted in the process. It made a further $8.7 million in the box office. A more successful reissue under the Disney Digital 3-D format came on October 19, 2007. In its third run, Nightmare made a further $15.8 million, with the final gross under three releases at $74.88 million.

These reissues have led to a reemergence of 3-D films and advances in Real D Cinema. Disney released the film again on DVD in August 2008 as a two-disc digitally remastered "collector's edition". Nightmare has also led to a brand name for Emo and Goth subcultures. In addition Nightmare has inspired video game spin-offs, including Oogie's Revenge, The Pumpkin King (on Game Boy Advance) and the Kingdom Hearts series. A trading card game is also available. Since 2001, Disneyland has held a Nightmare Before Christmas theme for its Haunted Mansion Holiday attraction.

There has been pressure from Disney for a sequel. Henry Selick explained in August 2008, "there were discussions over the years about a possible sequel. When those discussions came up about seven years ago [2001], it was unsettling that it was suggested this time it would have to be done in computer animation. I'm glad that did not happen. But as far as coming up ideas for a sequel, you have to admit there are a lot of other great holidays for Jack Skellington to take over." Burton stated, "I was always very protective of [Nightmare], not to do sequels or things of that kind. You know, "Jack visits Thanksgiving world" or other kinds of things, just because I felt the movie had a purity to it and the people that like it," Burton said. "Because it's not a mass-market kind of thing, it was important to kind of keep that purity of it. I try to respect people and keep the purity of the project as much as possible."

The 2005 video game The Nightmare Before Christmas: Oogie's Revenge did continue the story of the film, with Capcom's crew of developers going after Tim Burton for advice, and having the collaboration of the film's art director, Deane Taylor. In 2009, Selick said he would do a film sequel if he and Burton could create a good story for it.

Tim Burton's Greeting - 20th Anniversary of The Nightmare Before Christmas