Johnny Depp
Victor Van Dort is a timid young man caught in an arranged marriage. He is the protagonist of Corpse Bride.

Victor Van Dort is seen drawing a butterfly from the butterfly in the cage. He finishes the sketch and sets the critter free, before looking down below at his parents, who were preparing a carriage for their departure to the Everglot Manor.

In the carriage, Victor is unsure about meeting the young Victoria and is assured by his parents “What could go wrong?” Victor finds a piano at the manor and begins to play, attracting the attention of Victoria, who comes downstairs and accidentally scares Victor half to death, jumping up and knocks over the seat. Victor and Victoria have their first meeting briefly, and get caught by Lady Everglot, who scolds them before escorting them to where Victor and Victoria’s rehearsal will be.

When the Wedding Rehearsal goes wrong, Victor is then instructed to "learn his vows" by Pastor Gastwells.

In the woods, Victor is sad that he messed up, but he's determined to be a great groom for his lovely Victoria. He practices his vows and puts Victoria's ring on a twig, but the twig turns out to be a finger for a corpse named Emily, who thinks that Victor is her husband. He tried to escape from her but catches him at the bridge where she kisses him and Victor ends up fainting and wakes up in Land of the Dead. He tried to run away again, but Emily catches onto him and gives him his old dog Scraps as a wedding present. Wanting to profess his love to Victoria, he convinces that Emily should meet his parents, so they go to Elder Gultnech for a way to go back up. The only way to go back is to say "Hopscotch". Victor leaves Emily in the woods, so he can head back and talk to Victoria. He confesses that he's in love with her and plans to marry her soon. She admits that she's in love with Victor too and can't wait. Before their lips can touch, Victor sees Emily from behind and tries to tell Victoria that he accidentally married her and Emily spirits him back to the Land of the Dead, before Victor can reach his beloved's hand. Emily angrily tells Victor that Victoria's the other woman, but Victor knows that it was Emily who's the other woman and decides to break up with her, saying that they're too different, even confessing that he would never marry her.

Victor then decides to apologize to Emily and becomes her friend by playing the piano with her. Even though Victor is in love with Victoria, he gets heartbroken when he learns that she's being forced to marry Lord Barkis Bittern. Victor, out of despair decides to marry Emily above the Land of the Living and kill himself by drinking a poisoned goblet. As he does the wedding ceremony by force, Emily notices Victoria, who escaped her groom and made it to the church and lets him be with her. Victor and Victoria are happy to be reunited.

Suddenly, Barkis, Victoria's groom and Emily's murderer comes in and prepares to kill her, but he and Victor have a sword fight, though Victor has a fork. Before Victor could be stabbed, Emily stands in front of Barkis and tells him to get out. Victor, Victoria and Emily watch Barkis die from drinking the potion and the Land of the Dead citizens take him away. Victor tells Emily he made a promise, but Emily told him he kept it by setting her free.

As a reward, she gives him back Victoria's ring saying that she can do the same for him. Victor smiles, happy that he's marrying Victoria at last. He and Victoria then watch Emily turn into a bunch of butterflies and fly into the moonlight. 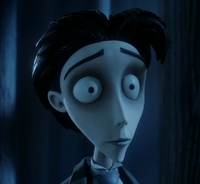 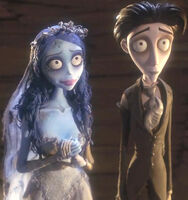 Add a photo to this gallery

Retrieved from "https://timburton.fandom.com/wiki/Victor_Van_Dort?oldid=12045"
Community content is available under CC-BY-SA unless otherwise noted.