Victoria Everglot is the pretty, kind and caring fiancée to Victor Van Dort. She is the main tritagonist of Corpse Bride.

She is first seen getting her corset on by her maid Hildegarde and asks what if she and Victor don't like each other. Her parents come in and ask her if she thinks they like each other. She answers "you must, a little." They dismiss it and leave her away. She is also shown to be neglected by her parents since they don't understand her or listen to any of the feelings she has. She is then seen dressed in a red ruffled Victorian Era corset dress with ruffles on the collar, skirt and sleeves and her hair in a bun. Victoria hears Victor's piano solo and she says that he plays beautifully which makes him feel very nervous. She is also concerned for, and not mad at, Victor for ruining the rehersal and hopes that he'll return in time for their wedding. She is seen again with the adults as they talk about Victor's disappearance. While she is sewing in her room, she sees Victor at her balcony and lets him in. Happy to see him, but concerned of what happened to him, she asks him what happened. Victor confesses that he's terrified of getting married at first, but after falling in love with her, he wishes to marry her right away. She admits the same and when both intend to kiss, Victor is spirited away by his "bride" Emily. Victoria tries to get her parents to believe her, but they think she's gone insane and locks her up. Desperate measures take Victoria to see Pastor Gastwells since he knows about the dead, but he takes her home and Victoria's parents lock her up again. Victoria is shocked that she's learning to marry Barkis Bittern(Victor's rival for Victoria), and she couldn't do anything to prevent it. Once the dead come back to the living and head to the church, Victoria learns that Barkis doesn't want to marry her for love like Victor does, he wanted to marry her for her dowery and also to kill her for it. She breaks up with him and heads to the church to find Victor about to marry Emily, thinking that he is too late for her and is about to commit suicide by drinking poison. After Emily sees Victoria, she stops the wedding and allows Victoria to be with her love, showing that there are no hard feelings and she understands Victor's love for Victoria. Soon Barkis comes and tries to kill Victoria, but Victor fights him until Barkis accidentally kills himself with the potion. NOw a widow, Victoria marries Victor and they watch Emily turn into butterflies and fly up into the sky to heaven. 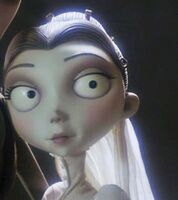 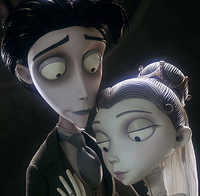 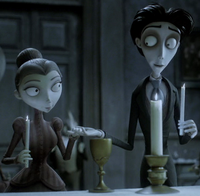 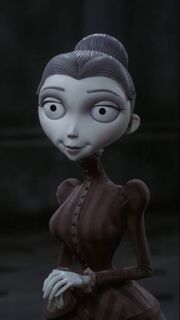 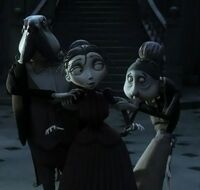 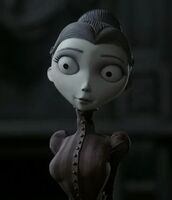 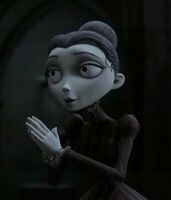 Add a photo to this gallery
Retrieved from "https://timburton.fandom.com/wiki/Victoria_Everglot?oldid=11660"
Community content is available under CC-BY-SA unless otherwise noted.