AnnaSophia Robb
Violet Beauregarde is a fictional character from the Roald Dahl novel Charlie and the Chocolate Factory and the subsequent film adaptations. She is the third winner of the Golden Ticket, and the second child to meet her endgame at Wonka's factory. Violet Beauregarde is one of the four main antagonists of the 2005 film.

In the 2005 film adaption, Violet (AnnaSophia Robb) is a preteen who lives in Atlanta, Georgia. She is athletic and has a vicious competitive streak, having won 263 trophies and medals in various events ranging from martial arts competitions to gum-chewing contests; she is a junior champion and world-record holder in the latter. Violet and her mother wear matching outfits and have matching hairstyles. Violet had been working on the same piece of gum for three months straight at the time that she had found her Golden Ticket. During the ticket search, she temporarily laid off gum and switched to Wonka Bars, keeping the aforementioned wad stored behind her ear in the meantime. Violet's mother Scarlett Beauregarde (Missi Pyle), a former baton champion herself, initially encourages her daughter's unladylike behavior and rude attitude, acting in a true soccer mom/stage mom/female football coach fashion; however, her approval and pride of her daughter turns into disapproval and embarrassment when they leave the factory and head back to Atlanta, after she encouraged Violet's act of disobedience to Wonka's commands. 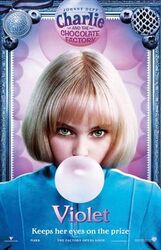 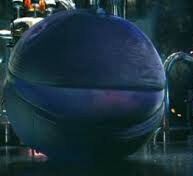 Violets 600 lb life cameo
Add a photo to this gallery
Retrieved from "https://timburton.fandom.com/wiki/Violet_Beauregarde?oldid=11596"
Community content is available under CC-BY-SA unless otherwise noted.